Buzzfeed’s comprehensive study to the growing universe of partisan websites and Facebook pages about US politics reveals that in 2016 alone at least 187 new websites launched, and that the candidacy and election of Donald Trump has unleashed a golden age of aggressive, divisive political content that reaches a massive amount of people on Facebook.

This presentation by Scott Galloway should be watched by every one but especially regulators and elected officials.

As I’ve said, Facebook isn’t email, that’s how you know it’s a publisher not a platform.   Users don’t communicate with each other, they communicate with Facebook.  Any claim that Facebook isn’t a publisher is self-serving nonsense.  Facebook decides which messages to highlight and which ones to bury.  These are editorial decisions.  It doesn’t matter if they are administered by an algorithm, they were designed by humans.

Facebook’s objective is to increase your participation (“engagement” in their language) and that means a structural bias towards outrage because, empirically, that’s what people respond to.  Outrage is profitable for Facebook, especially since tracking what outrages individuals makes advertising more effective.  But outrage is corrosive for both civilised behaviour and a well-informed civil society.  It is especially dangerous when outrage is the primary news source, an inevitability when the print alternative is no longer supported by advertising.

In economic terms, Facebook is only profitable because outrage is an external cost the public bears.  A recognised economic principle is that the polluter pays, so one way forward is to devise a mechanism to charge Facebook to encourage it to ameliorate its behaviour.  Personally, I’d just ban adverts from Facebook, force it to charge a subscription and regulate it as a utility whilst we sort out how to separate the socnet layer (identity/ publishing) from the content.

Only Scott Galloway could devise such a brilliant graphic.

I’m afraid that the NAO’s recommendations are less impressive. Let me give an example. The main online fraud bothering Cambridge University relates to bogus accommodation; about fifty times a year, a new employee or research student turns up to find that the apartment they rented doesn’t exist. This is an organised scam, run by crooks in Germany, that affects students elsewhere in the UK (mostly in London) and is netting £5-10m a year. The cybercrime guy in the Cambridgeshire Constabulary can’t do anything about this as only the National Crime Agency in London is allowed to talk to the German police; but he can’t talk to the NCA directly. He has to go through the Regional Organised Crime Unit in Bedford, who don’t care. The NCA would rather do sexier stuff; they seem to have planned to take over the Serious Fraud Office, as that was in the Conservative manifesto for this year’s election.

Every time we look at why some scam persists, it’s down to the institutional economics – to the way that government and the police forces have arranged their targets, their responsibilities and their reporting lines so as to make problems into somebody else’s problems. The same applies in the private sector; if you complain about fraud on your bank account the bank may simply reply that as their systems are secure, it’s your fault. If they record it at all, it may be as a fraud you attempted to commit against them. And it’s remarkable how high a proportion of people prosecuted under the Computer Misuse Act appear to have annoyed authority, for example by hacking police websites. Why do we civilians not get protected with this level of enthusiasm?

Many people have lobbied for change; LBT readers will recall numerous articles over the last ten years. Which? made a supercomplaint to the Payment Services Regulator, and got the usual bland non-reassurance. Other members of the old establishment were less courteous; the Commissioner of the Met said that fraud was the victims’ fault and GCHQ agreed. Such attitudes hit the poor and minorities the hardest.

The NAO is just as reluctant to engage. At p34 it says of the Home Office “The Department … has to influence partners to take responsibility in the absence of more formal legal or contractual levers.” But we already have the Payment Services Regulations; the FCA explained in response to the Tesco Bank hack that the banks it regulates should make fraud victims good. And it has always been the common-law position that in the absence of gross negligence a banker could not debit his customer’s account without the customer’s mandate. What’s lacking is enforcement. Nobody, from the Home Office through the FCA to the NAO, seems to want to face down the banks. Rather than insisting that they obey the law, the Home Office will spend another £500,000 on a publicity campaign, no doubt to tell us that it’s all our fault really.

If you’re not up to speed on the corrosive effects of outrage (or what Facebook calls “engagement”) , this is a good introduction.

In the wake of a terrorist attack in London earlier this month, a U.S. congressman wrote a Facebook post in which he called for the slaughter of “radicalized” Muslims. “Hunt them, identify them, and kill them,” declared U.S. Rep. Clay Higgins, a Louisiana Republican. “Kill them all. For the sake of all that is good and righteous. Kill them all.”

But a May posting on Facebook by Boston poet and Black Lives Matter activist Didi Delgado drew a different response.

“All white people are racist. Start from this reference point, or you’ve already failed,” Delgado wrote. The post was removed and her Facebook account was disabled for seven days.

A trove of internal documents reviewed by ProPublica sheds new light on the secret guidelines that Facebook’s censors use to distinguish between hate speech and legitimate political expression. The documents reveal the rationale behind seemingly inconsistent decisions. For instance, Higgins’ incitement to violence passed muster because it targeted a specific sub-group of Muslims — those that are “radicalized” — while Delgado’s post was deleted for attacking whites in general.

It is difficult to overstate the importance of headlines. A good headline can entice and engage your audience to click, to read, and to share your content. In many cases headlines are the thing that is shared rather than the article. So you knew that. But do you know what makes an engaging headline? 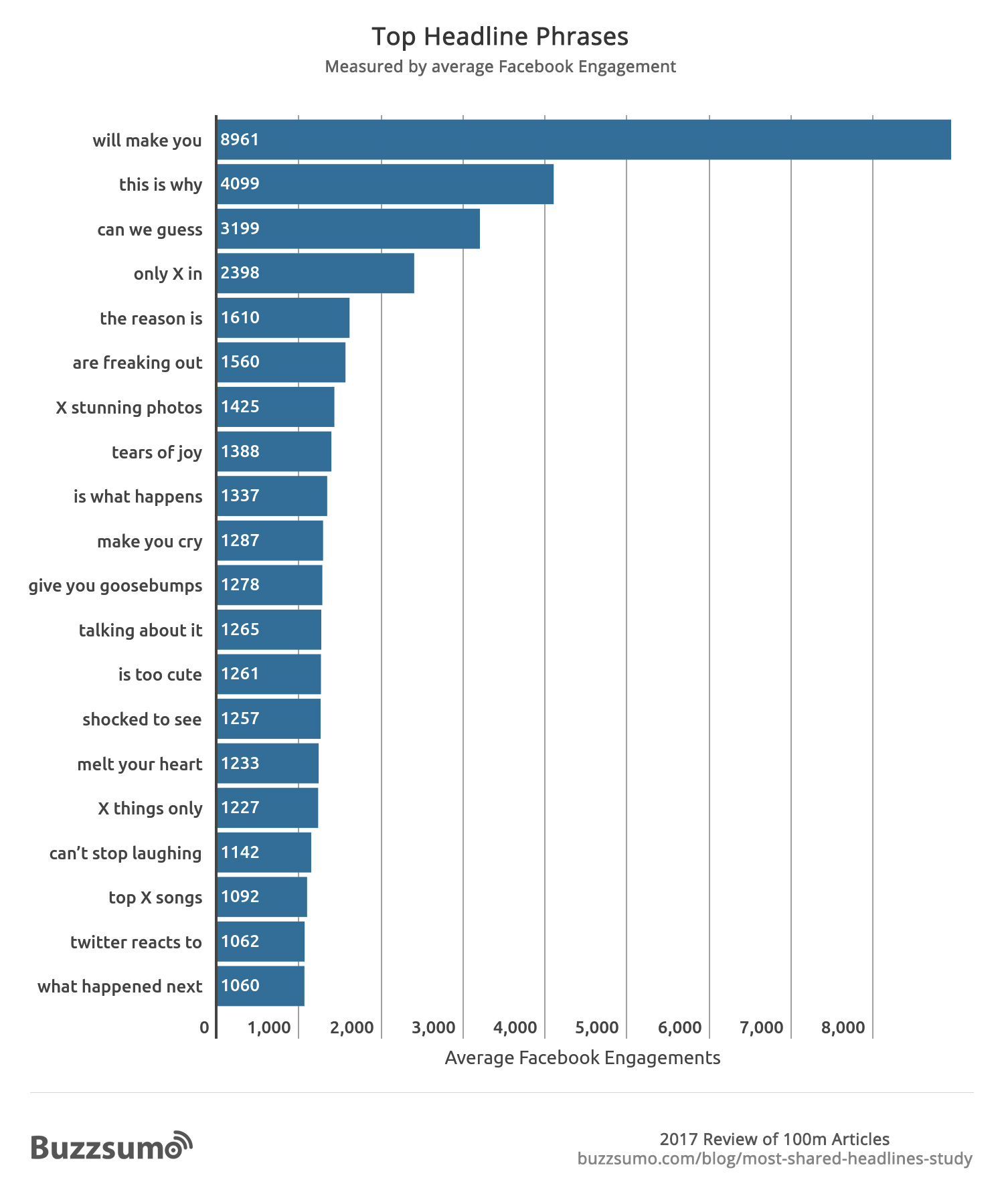 To create this comprehensive list, Google first has to remove all of the duplicate listings that employers post to all of these job sites. Then, its machine learning-trained algorithms sift through and categorize them. These job sites often already use at least some job-specific markup to help search engines understand that something is a job posting (though often, the kind of search engine optimization that worked when Google would only show 10 blue links for this type of query now clutters up the new interface with long, highly detailed job titles, for example).

Once you find a job, Google will direct you to the job site to start the actual application process. For jobs that appeared on multiple sites, Google will link you to the one with the most complete job posting. “We hope this will act as an incentive for sites to share all the pertinent details in their listings for job seekers,” a Google spokesperson told me.

As for the actual application process itself, Google doesn’t want to get in the way here and it’s not handling any of the process after you have found a job on its service.

It’s worth noting that Google doesn’t try to filter jobs based on what it already knows. As Zakrasek quipped, the fact that you like to go fishing doesn’t mean you are looking for a job on a fishing boat, after all.

Google is very clear about the fact that it doesn’t want to directly compete with Monster, CareerBuilder and similar sites. It currently has no plans to let employers posts jobs directly to its jobs search engine for example (though that would surely be lucrative). “We want to do what we do best: search,” Zakrasek said. “We want the players in the ecosystem to be more successful.” Anything beyond that is not in Google’s wheelhouse, he added.

If I wanted a large data set for training an AI to identify, understand and track individuals, this is exactly the service I’d launch to get one.  And I’m sure Google currently has no plans to allow people to list jobs directly on Google.

Entrepreneurs are universally celebrated, but what if modern day entrepreneurship is creating ventures that do more harm than good?

A piece this week in Harvard Business Review by Robert E. Litan and Ian Hathaway reminds us of this point by citing the work of William Baumol, who passed away last month.

Baumol’s overarching theory is fantastically compelling. It suggests the number of entrepreneurs in an economy is essentially fixed and what influences a nation’s entrepreneurial output is how those entrepreneurs are incentivised.

As per our own longstanding argument that innovation should not be treated as a universally positive phenomenon — since innovation comes in both good and bad forms — the view here is that the underlying incentive structure of the economy in which an entrepreneur operates dictates whether ventures are productive or unproductive.

If the U.S. is going to tackle its many problems, we are going to have to find ways to encourage would-be entrepreneurs to start innovative, productive businesses, rather than dedicating their efforts to co-opting government in order to secure economic advantage.

It should be noted that no company exemplifies this unproductive practice more than Uber.

Hence it’s worrying that amidst all the focus on Uber’s horrible corporate culture, very little attention is still being paid to the underlying non-viability of the business model, which is mostly based on undercutting the competition via free giveaways, exploiting drivers and/or adjusting the rules of the regulatory framework to suit the company’s own monopolistic agenda.

Thank goodness then for Hubert Horan, who’s bucking the trend with another scathing analysis of what’s really the issue with Uber.

As he notes in Naked Capitalism on Thursday:

Uber’s strategy was always to skip the hard “create real economic value” parts of this process, and focus strictly on the pursuit of artificial market power that global dominance would provide. As noted, Uber’s $13 billion investment base was used to fund the predatory competition needed to drive more efficient competitors out of business. This was 1600 times the investment funding Amazon needed prior to its IPO because Amazon could fund its growth out of positive cash flow. By contrast, Uber’s carefully crafted “narrative” allowed it to pursue predatory competition for seven years without serious scrutiny of its financial results or whether its anticipated dominance would improve industry efficiency or consumer welfare.

And if that doesn’t persuade you perhaps the following will (our emphasis):

Kalanick’s management culture, while repulsive on many levels, was actually brilliantly aligned with its business strategy and its investors’ objectives. Companies that can make money in competitive markets by creating real economic value do not have to create ruthless, hyper-competitive cultures where there are no constraints on management behavior as long as they are totally loyal to the CEO’s vision and can rapidly capture share from more efficient competitors. None of Uber’s bad behavior was aberrant—it was a completely integral part of its business strategy. Without this culture, Uber would have never grown as rapidly as it has, and would have never had any hope of industry dominance.

Carole Cadwalladr in The Guardian looks at how election law has been so comprehensively outdated by modern technology.  This is an issue of national importance and a damning indictment on the major political parties that they don’t see it as a priority.